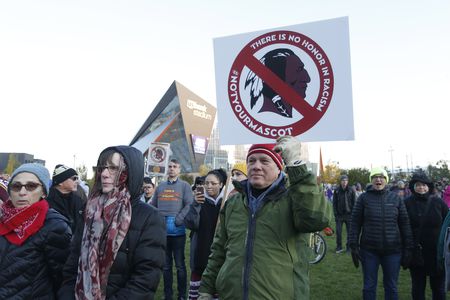 This morning the Washington Redskins announced via a press release that they would be changing the team's name as well as their logo.

The announcement comes less than 2 weeks after the team said they would do a "thorough review" of the name and logo.

"Dan Snyder won today because now he has a legacy that will be different from the racial slur that was the team name". Coach Ron Rivera had said the team wanted to include the military in its new name, as well. According to The Washington Post, FedEx sent a letter to Snyder stating that the business would remove its name and signage from the stadium if the name was not changed.

"July 13, 2020 is now a historic day for all Indigenous peoples around the world as the NFL Washington-based team officially announced the retirement of the racist and disparaging "Redskins" team name and logo", Navajo Nation President Jonathan Nez wrote.

Free agent linebacker Will Compton, who spent his first four National Football League seasons with the Redskins, tweeted last week, "I'd want to come back to Washington for one day and retire a Red Wolf".

Activists had long attacked the name and logo as demeaning to Native Americans, but Snyder insisted that it was intended (and taken) as a honest tribute to their courage. NFL Commissioner Roger Goodell said he is "supportive" of a name change.

The organization in a July 3 statement said it would conduct a review of the moniker.

Nike and Pepsi added their support for a name change, and Amazon and other retailers began pulling merchandise from the shelves.

Recently, a statue of the team's founder, George Preston Marshall has also been removed from the grounds of RFK Stadium. The current logo shows the profile of a red-faced Native American with feathers in his hair. They also want it to last for the next 100 years, which means we can assume it won't be almost as offensive as the freshly retired name.

So far, the Redtails and the Warriors have been thrown around as possible replacement names - you like?