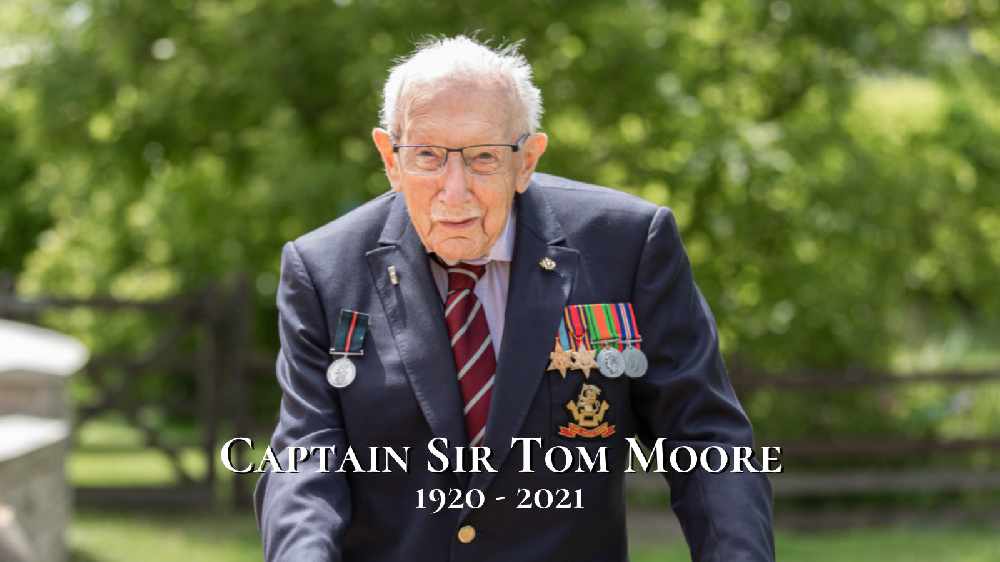 Captain Tom Moore receiving a knighthood from the Queen.

The flag above 10 Downing Street flew at half-mast in tribute to Sir Tom and the Prime Minister spoke to the veteran's daughter Hannah Ingram-Moore to offer his condolences. Sending love and condolences to family'.

At the time, NHS Charities Together Chief Executive, Ellie Orton, said: "If it wasn't for him and the remarkable fundraising her has done, we wouldn't be able to [provide] the extra support that we give to the NHS".

Moore struck a chord with locked-down Britain by walking around his garden with the help of a walking frame to raise £38.9 million (S$70 million) for the National Health Service.

'The past year of our father's life was nothing short of remarkable.

A Buckingham Palace spokesman said: "Her Majesty very much enjoyed meeting Captan Sir Tom and his family at Windsor past year".

He had initially set out to raise £1,000 in gratitude for the treatment he had received for skin cancer and a broken hip, but ended up attracting donations from 1.5 million supporters.

'Whilst he'd been in so many hearts for just a short time, he was an incredible father and grandfather, and he will stay alive in our hearts forever'.

Captain Tom's initiative, which started in April ahead of his 100th birthday, quickly went viral, resulting in some £33 million (about $40 million) of donations pouring in from both the United Kingdom and overseas.

Moore rounded off 2020 with a trip to Barbados with his family, and his fundraising efforts were marked during the New Years drone display in London, as his figure appeared over the O2 Arena.

'For one individual to get quarter of a million cards is a record itself, but what Captain Sir Tom has done for everybody is remarkable, the NHS the doctors and everyone who will be helped with the money he raised'.

Landmarks including the London Eye, Wembley Stadium and Blackpool Tower were lit up on Tuesday evening in tribute to Sir Tom.

It was announced earlier this week Capt Sir Tom had contracted the virus after battling pneumonia.

He had not been vaccinated against COVID-19 because of the other medication he was taking due to pneumonia.

"On January 22, Tom was discharged from hospital back to the family home where he felt most comfortable".