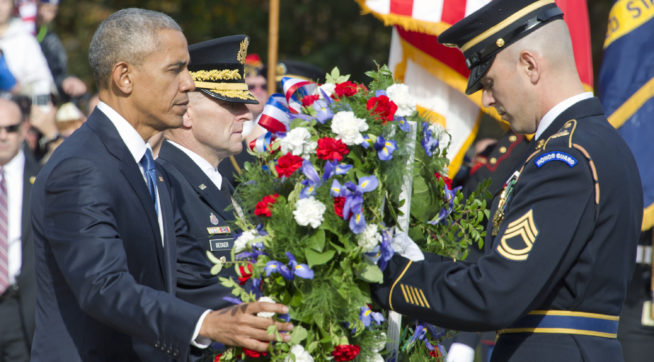 President Obama breaks record for pardons during his tenure in the White House.

"If you look at President Obama and other presidents, majority didn't make calls" to the families of soldiers who died in combat, Trump claimed, leading a former Obama official to call Trump a "liar" and "a deranged animal".

The Republican leader said in a news conference on Monday he had written letters to the families of four soldiers killed in an October 4 ambush in Niger and planned to call them, crediting himself with taking extra steps in honouring the dead properly.

While Obama's former staff members have grown used to Trump's jibes about the "failure" of the Affordable Care Act or the "disastrous" Iran nuclear deal, they lashed out at his remarks Monday with unusual bitterness.

Trump has so many flaws, and there are so many reasons he's ill-suited to the presidency and ill-equipped for its responsibilities, but sometimes, I simply wish he weren't such a small man in a big office.

But I do know the memory of 1st Lt. Robert Michael Kelly doesn't deserve to be treated as a partisan prop by a draft-dodging amateur whose profound insecurities overrides any sense of moral judgment he has left.

He and Ms Obama also had a Gold Star Christmas tree every year, honouring the families of fallen soldiers.

Donny Deutsch was also on the panel, and he was furious with Trump for deflecting blame away from how long it took the president to publicly acknowledge the deaths of four American soldiers in Niger.

While he did not explain why he had not called their families, Trump said he had written letters to the family members over the weekend, which he said would be mailed later in the day or on Tuesday.

The aide said the Kellys were seated at then-first lady Michelle Obama's table. "I write letters and I also call", he contended, adding that he has called "virtually everybody" during his time in office.

But Trump would not let it lie, claiming again with zero evidence that other presidents did not call. As a former White House chief of staff under Bill Clinton, Panetta said: "I suspect some staff members did not get letters 1/8about Niger3/8 to the president as quickly as possible".

"Her son was on life support, and from what I gathered and could tell, that his prognosis - that it was unlikely he would survive". All you have to do is ask the military people, but I believe his policy was somewhat different than my policy. They've been sent, or they're going out tonight", he said, adding later: "I'm going to be calling them.