Trump, Biden square off, in a way, in dueling town halls 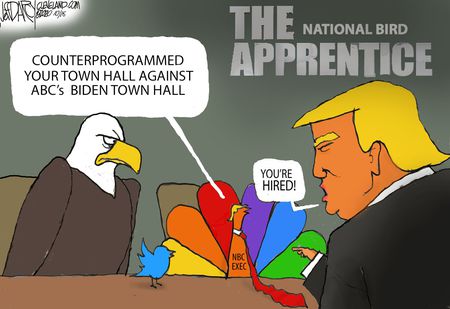 Instead of the expected debate between President Donald Trump and Democrat Joe Biden, television viewers were left Thursday with what ABC's David Muir called "split-screen America".

Even as NBC News was taking heat for its decision to hold a town hall event featuring President Trump directly opposite ABC's event with former vice president Joe Biden, moderator Savannah Guthrie drew praise for challenging Trump on a variety of topics, from his refusal to denounce white supremacy to his amplification of conspiracy theories.

Guthrie drew praise, particularly from journalists, who said she asked tough follow-up questions and pushed back on Trump's false claims when he made them.

"He just refused to denounce QAnon and now he's having a meltdown".

"You may recall I'm the guy who said, uh, I was raised by a man who - I remember I was being dropped off, my dad was a high school-educated, well-read man who was a really decent guy, and I was being dropped off to get an application in the center of our city, Bloomington, Delaware, the corporate capital of the world at the time", Biden said during the event.

"I just told you", Guthrie replied.

Trump also dodged questions about a New York Times investigation of two decades of his tax returns, which he has refused to release publicly despite decades of precedent for presidential candidates. "That was an opinion of somebody", Trump said. "Can you just once and for all just state that that is completely not true?"

One Twitter user wrote: "This Trump town hall is a f***ing disaster for him".

Previously on the record as pro-choice, Trump wouldn't answer if he wants Roe v Wade overturned. It is this theory that Democrats are a satanic pedophile ring and that you are the savior of that.

Biden also said that Haeck's daughter should not suffer any discrimination for who she is.

The Washington Post also picked its own highlights from both town halls.

There were apparently still hard feelings, given that Muir twice mentioned a nameless "another network" holding a Trump town hall.

If NBC management was being civically responsible, they would have aired the Trump town hall on another night or in a different time slot, either before or after the Biden town hall on the same night.