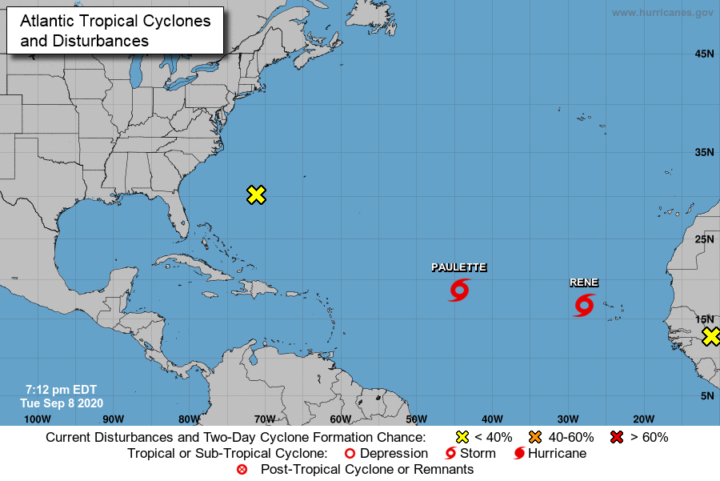 Kim Wilson, the Minister of Health, said the possible impact of a tropical storm or hurricane on the islands coronavirus test system had been discussed by the Emergency Measures Organisation.

Tropical Storms Paulette and Rene were in the center of the Atlantic ocean, far from most land, and were forecast to strengthen into Category 1 hurricanes in the next few days. Two of them are tropical storms, and one is poised to strike Bermuda. It may interact with tropical depression 18, located behind it, which also formed Monday morning. Rene was located near latitude 16.8 North, longitude 27.9 West.

The systems closest point of approach within the next three days is expected to be 1,010 miles, but it is expected to come closer after that time. Gradual weakening is then expected to begin on Wednesday and should continue for a couple days thereafter.

If that trajectory holds it could eventually be something for those in the Caribbean to keep an eye on.

Paulette is expected to weaken a little tomorrow and Friday before it gained strength over the weekend as it continued to approach the island.

At 11 a.m. EDT (1500 UTC) on September 8, Tropical Storm Rene was bringing tropical-storm force winds and heavy rain to the western Cabo Verde Islands. The hurricane center expects Rene to get stronger over the next day or two, and it could briefly become a hurricane by late in the week.