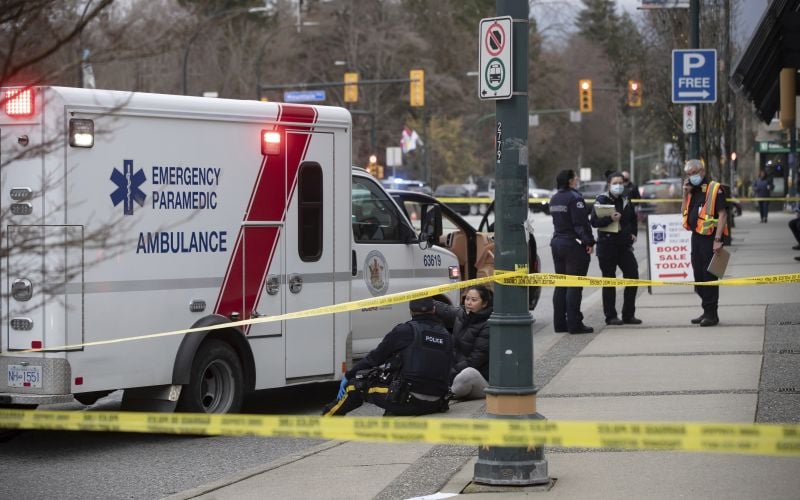 Six others were injured in the attack at the Lynn Valley Public Library.

"We weren't immediately aware of the violence that had just taken place because the area was so calm", Hailes recounted in an interview on Sunday.

A cop speaks with a witness outside the scene of a murder at Lynn Valley Library in Vancouver on Saturday.

He added, "I saw people receiving first aid from paramedics next to a vehicle and also next to a restaurant, before they were taken on stretchers".

"After he did the stabbings by the library, essentially chaos ensued; I saw his standoff with police, he fled the scene and the police started chasing him, cornered him, and brought him to the ground".

He described the matter as "very sad, especially since one of them was apparently a child", noting that his brother "was in the library only 30 minutes before the attack and my father meant to go to it to borrow a book".

Hailes said he later talked to a man who tried to lure the attacker away from other people around the library.

A video allegedly showing the moment the police arrested the suspect was shared online, showing officers apprehending a man who holds what appears to be a knife.

Yannick Bandaogo, who was arrested at the scene, is accused of carrying out the attack at the Lynn Valley library in which one woman in her late 20s died. They then saw several victims within about 100 meters (yards) of each other, he said.

The incident took place outside the Lynn Valley Library, with police reportedly responding to reports of a stabbing "just after 1:45 p.m. A random group of individuals in the wrong place at the wrong time".

"It seemed like he was just running in a direction, whoever was in his path happened to be victimized", he said. A suspect, who apparently acted alone, was eventually taken into custody.

Jonathan Wilkinson, the MP for North Vancouver who is also Canada's environment minister, issued a statement on Twitter saying the "horrific incident" at the library left him "shocked and shaken". "Until today, it was unimaginable that such a senseless act of violence could have occurred in the very heart of it".

"Everything little thing is important on this one".