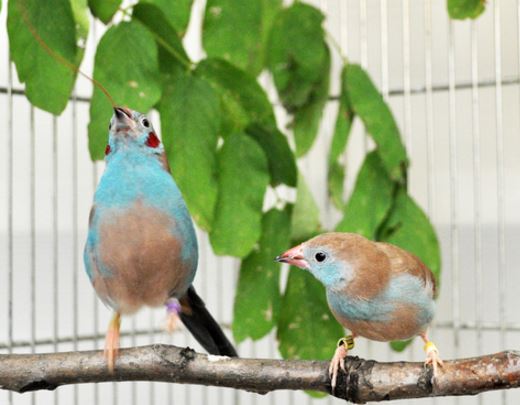 Researchers observed the behavior of blue-capped cordon-bleu and the red-cheeked cordon-bleu songbirds in this study. About three inches tall, the bird performs a spectacular dance in order to woo their potential mate, rattling through dance routines that feature head-bobbing, singing and tap dancing. While it is well-known that socially monogamous songbird males sing to attract females, we report here the first example of a multimodal dance display that is not a uniquely male trait in these birds. The team used high-speed cameras to capture the behavior, spotting an intricate series of steps when they slowed the footage down.

Scientists actually filmed the birds as they tried their luck with cage mates, and found that both males and females turned to tap to seduce their targets. These tap-dancing movements do not differ by gender, but per individual bird.

The blue-capped cordon-bleu's courtship displays included several multimodal (tactile, visual, acoustic), multicomponent (vocal and non-vocal sounds) and motor behaviours (stepping, singing and bobbing). A few species are known to use their wings for non-vocal sounds, but this might be the first time when feet are involved in the show. The researchers studied about 16 blue-capped cordon-bleus, with eight male birds and eight female birds.

'It's a really rare phenomenon that songbirds produce non-vocal sounds, ' said senior author Masayo Soma, from Hokkaido University in Japan. However, scientists were able to catch a glimpse of the invisible by using high-speed video cameras, and the result is rather impressive. Dr. Soma said it was rather hard to get the picky birds interested in performing the courtship "dance".

The timing of the steps appeared to be coordinated with the songs they sang.

"One possibility is that cordon-bleus are looking for best tap-dance performers, but according to our observation, there was no tendency that [a] particular male or female with more number of steps was popular among the other sex", said Soma, adding that it was a bit puzzling.

And it challenged the classical theory of sexual selection which postulate that elaborate singing and dancing courtship displays are performed only by males.