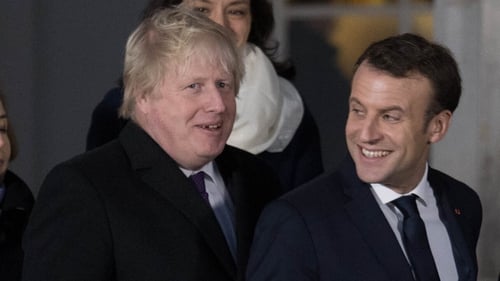 The French leader was also treated to a joint flypast by the Red Arrows, the Royal Air Force's aerobatic team, and their French counterparts, the Patrouille de France.

Standing apart on either side of a strip of red carpet outside Number 10 Downing Street, Prime Minister Boris Johnson and French President Emmanuel Macron demonstrated the unusual reality of worldwide diplomacy in the coronavirus era.

French politicians are calling the vandalism of two statues of Charles de Gaulle an insult to the nation, as their president visits London to commemorate the 80th anniversary of the French Resistance.

Mr Macron's status as a visiting foreign dignitary will spare him the controversial two-week virus quarantine now demanded by the British authorities of all visitors from overseas.

Inside the Prime Minister's residence at 10 Downing Street Macron and Johnson took a look at documents and artefacts related to former French president Charles de Gaulle.

De Gaulle and the Free French made their wartime base in nearby Carlton Gardens and from the building began to build up their forces.

But a similar broadcast four days later on the same network reached a wider audience and went a long way to establishing de Gaulle as his country's leader in-exile.

Britain's social distancing rules state that people should remain two metres apart to help limit the spread of the coronavirus which has swept across the globe, causing tens of thousands of deaths in both Britain and France. Known as the "Appel", or appeal, it rallied the country in support of the Resistance.

Nodding to the impact of de Gaulle's address, Macron said the United Kingdom had given France "its first weapon: a BBC microphone".

"The struggles we face today are different to those we confronted together 80 years ago", he said.

Johnson said the men symbolised "the enduring depth and strength" of Franco-British friendship, which has been tested anew since Britain voted to quit the European Union in a 2016 referendum.