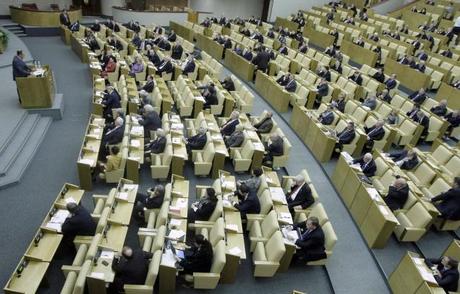 "You cannot have too much security and any system needs further perfection", she said.

The document calls for additional measures to ensure the security of ordinary citizens during public events, in public places and on various forms of transport.

The Federation Council will consider measures against those who provide "moral, financial, informational and other support" for terrorists, Speaker Valentina Matviyenko told a joint session of parliament on Friday.

Mr Sergei Naryshkin, the head of the Lower House of Parliament, said lawmakers needed to analyse the legal base underpinning national security to better protect people and strategic sites.

Putin on Tuesday vowed to hunt down those responsible for blowing up an Airbus A321 packed with Russian tourists over Egypt on October 31.

Both Russia and France have stepped up their bombing campaigns in war-torn Syria in the aftermath of the Paris attacks, with the Russian air force saying this week it was targeting oil infrastructure belonging to IS. Leader of the political party A Just Russian Federation Sergey Mironov suggests lifting a moratorium on the use of the death penalty against terrorists and their accomplices, TASS reported.

Mr Putin's spokesman Dmitry Peskov said Mr Mironov's idea was a new one, but that the issue was complex, while Mr Sergei Ivanov, Mr Putin's chief-of-staff, said Russians would back such a proposal but that it was "premature" to reinstate capital punishment.

French President Francois Hollande will hold talks next week with U.S. President Barack Obama in Washington and with Putin in Moscow to discuss his call for an alliance to destroy Islamic State.

Russian Presidential aide Yuri Ushakov said November 20 that President Vladimir Putin will meet Hollande in Moscow on November 26 to discuss the coordination of French and Russian actions in combating terrorism.