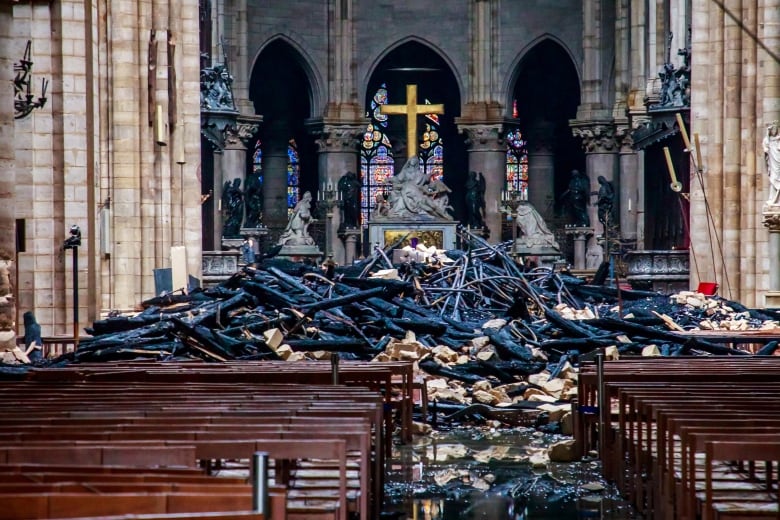 As the fire-gutted Notre-Dame Cathedral in Paris faces years of reconstruction, a Montreal-made video game may provide some comfort for those longing to revisit every inch of the church, from the soaring spire and towers to the cavernous vault. "Should we rebuild the spire envisaged and built by Viollet-le-Duc under the same conditions ..." The building's spire and the roof collapsed.

He wrote on his Telegram account: "How does an "accidental" fire during restoration works start in two different places at once?"

Investigators will not be able to enter the cathedral's blackened nave until experts are satisfied its walls withstood the heat and the building is structurally sound.

Notre Dame was built over almost 200 years starting in the middle of the 12th century, though it was only in the mid 1800s that architect Eugene Viollet-le-Duc added the lead-covered spire during restoration work.

As he spoke, firefighters were using a crane to hoist supports to stabilise a fire-ravaged pinnacle that houses one of the cathedral's historic rose stained-glass windows.

The pope said Wednesday that "I take this opportunity to express to the Paris diocesan community, all Parisians and the entire French population my great affection and my closeness after the fire in Notre Dame Cathedral".

Buildings such as Notre Dame - full of hidden nooks and passages, and composed of ancient timber and other old materials - are seen by fire prevention experts as particularly risky, especially when they are under renovation. Players take on the role of Amo Dorian, one of the many historical Assassins who have been fighting a centuries-long war against the Templars. "I don't have access to my office", he said.

Officials have warned that Notre Dame may still have gravely unsafe vulnerabilities, especially in the soaring vault. Among them are workers at the five construction companies who were involved in renovating the church spire and roof. Brought to Paris by King Louis IX in the 13th century, it is purported to have been pressed onto Christ's head during the crucifixion.