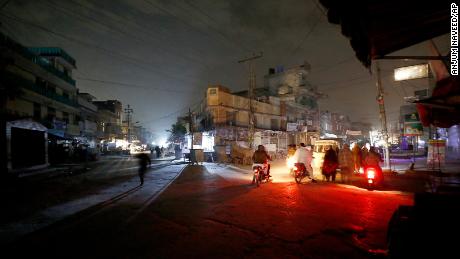 The blackout plunged all of Pakistan's major cities into darkness, including the capital Islamabad, economic hub Karachi and the second-largest city Lahore.

The outage was reported shortly before midnight on January 9 nearly simultaneously in many cities, the Dawn reported.

Over 114 cities across Pakistan in midnight had a sudden blackout as the NTDC transmission lines tripped, as per government officials.

Recently, the Ministry of Energy stated on Twitter that the blackout was caused after the frequency in the national power distribution system suddenly fell from 50 to zero. "The dropped frequency led to a shut down of the power plants", he wrote. As the Minister for Power I am personally overseeing the work for restoration of power.

In a subsequent update, Ayub said that a preliminary probe has revealed that the fault originated in Guddu at 11:41pm on Saturday. "2021 game strong", said a Twitter user.

Peshawar Electric Supply Company (Pesco) said electricity has been restored in some parts of Peshawar as 36% of the grid stations have been energized. Another person said, "Pakistanis: Bhai Pakistan sahi nhi chal raha @ImranKhanPTI have you tried turning it off and on?"

"Meanwhile, please pray for all those who are now on ventilators".

Yab said restoration of power to all areas of the country would take some time, however.

Later, Khan also posted a series of tweets regarding restoration of power in several grids.