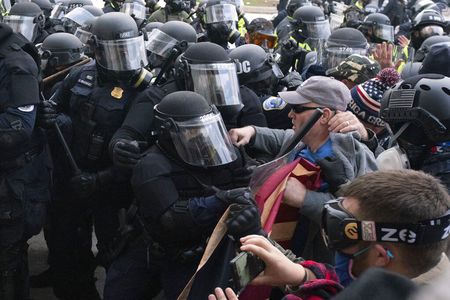 In the video, which was cited in the complaint against Keller, Capitol Police tussle with rioters in the Rotunda, and Keller was pushed back with the crowd by police shields.

One of the most enduring images of the assault on the U.S. Capitol was that of a long-haired, bearded man wearing a black sweatshirt with a skull and crossbones graphic and the words "Camp Auschwitz" in large font.

Court papers show how investigators are combing through internet communications to identify alleged offenders like Mostofsky, who referred to himself as a "caveman" eager to protest the presidential election results.

Young also denounced white supremacy and expressed dismay over the "double standard" at the Capitol riots, which he said contrasted the "way people were treated" at the Black Lives Matter marches a year ago.

The New York Times also received numerous positive identifications of Keller, with several mentioning that they recognized him from his height and clearly visible Team USA jacket.

Assistant U.S. Attorney Josh Hafetz told a magistrate judge in Brooklyn federal court that the government would agree to Mostofsky's release even though it was "deeply troubled by the conduct of the defendant" in a "mob attack".

In a Facebook video by Newbold posted the night before the riot, he said there are "good people on all sides of this thing" but they "can no longer be quiet".

The company released a statement saying that it supports free speech, but can not tolerate actions that "violate the rule of law", the Post reports.

Keller, 38, was a United States gold-medal 4x200m relay teammate of swim legend Michael Phelps at the 2004 Athens and 2008 Beijing Olympics. An FBI spokeswoman from the Washington, D.C. Field Office would not confirm Wednesday that he is being questioned, saying the bureau does not comment on specific investigations. "I urge everyone associated with Team USA to continue to celebrate our diversity of background and beliefs, stand together against hatred and divisiveness, and use our influence to create positive change in our community".