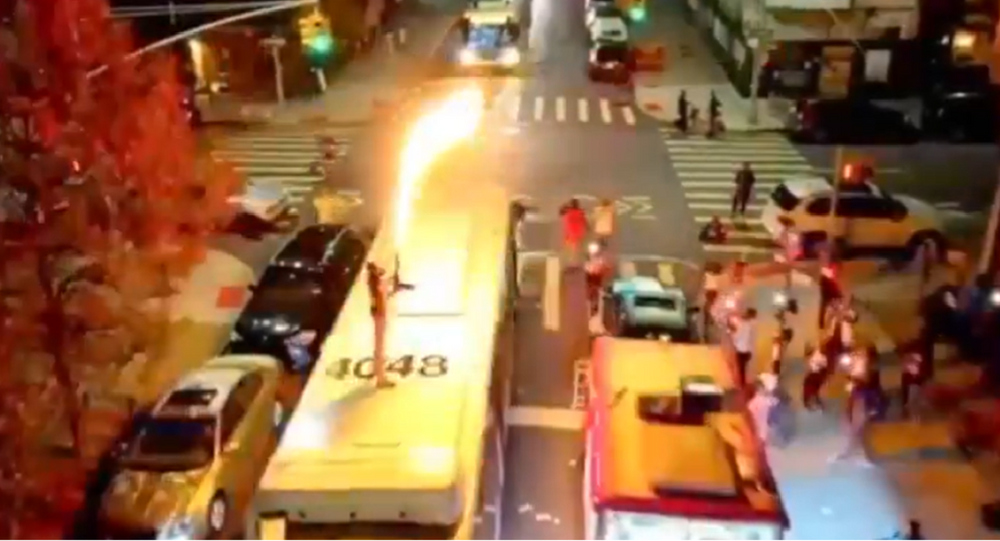 "The reckless individual who torched over the top of an occupied bus put New Yorkers, including the bus operator, in life-threatening peril".

As part of a music video, the young NY rapper Christopher Dupree has turned himself in to the NY police who accuse him of reckless recklessness for having climbed on the roof of a bus with a flamethrower that he triggered several times although he alleges that he was recording a music video, this was released by local media in addition to affecting some vehicles in the surroundings.

As he was taken into police custody, he told reporters, "it was for the art".

The musical artist was filmed earlier this month in an unauthorized stunt that he said was part of a tribute video for the hip-hop group Wu-Tang Clan.

An employee at the firm said Dupree wanted "to wear apparel while getting arrested if any brand will pay him" and was looking for a company that wanted to 'maximize on all the publicity he's gotten'.

Dupree, who also calls himself Flame G.O.D, posted drone footage that shows the stunt from above.

The wannabe rapper had shared footage of his performance on Twitter where he described the stunt as 'epic'.

A crowd can be heard cheering as the man fires off the flamethrower.

"This was artistic expression in a controlled environment where no one was hurt", said Cary London, an attorney representing Dupree.

"We shut Franklin Avenue down".

The NYPD said it was aware of the video which is being investigated by its 79 Precinct Detective Squad.

'Keep defunding the police this will become rampant'.

The city's Metropolitan Transportation Authority confirmed that 25 passengers on the bus got off at the next stop and were picked up by the next bus on the route.