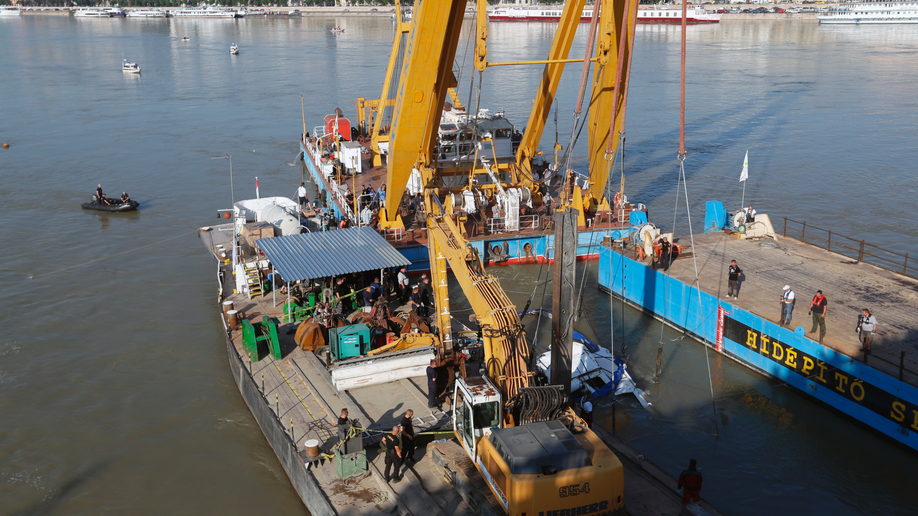 Efforts to search for the missing victims and to raise the Mermaid have been hindered by the Danube's high springtime water levels, its fast flow, and near-zero visibility under water.

Nineteen South Korean tourists and a Hungarian crewman were previously confirmed to have died, with eight people still listed as missing.

Four bodies, three of them believed to be South Koreans, were found in the wreck of a tour boat raised from the Danube River early Tuesday (Budapest time), almost two weeks after its deadly sinking left 26 South Koreans dead or missing.

The lifting operation began at around 6 am (0400 GMT) and six hours later the Mermaid tourist boat was nearly entirely out of the water.

The search for the missing victims would continue along the Hungarian section of the Danube River south of Budapest, Gal said.

A large floating crane, barges and rescue personnel were working early on Tuesday morning at Margaret Bridge, where the Mermaid sightseeing boat sank on 29 May after colliding with a river cruise ship.

State news agency MTI reported that a total of four victims had been found on Tuesday and recovered by divers. Salvage crews saluted in respect as each body was removed. Seven were rescued right after the accident. The salvage crew instead focused on fixing wire harnesses underneath the vessel to prepare it for hoisting by a powerful crane mounted on a barge.

On Monday the Sigyn was again searched by Hungarian police.

Damage was visible to the rear part of the Mermaid where the collision occurred.

The Ukrainian captain of the larger boat, the Viking Sigyn, has been held on suspicion of endangering water transport, although he denies he did anything wrong.

One of the bodies appears to be the Hungarian captain of the sightseeing boat, the Hableany, while the three others are believed to be South Korean passengers, seven of whom are still missing after the May 29 sinking, officials said. More bodies were recovered in the following days of the accident.

The Mermaid accident happened on a popular part of the Danube river for pleasure trips, from where passengers can view the city and parliament building illuminated at night.