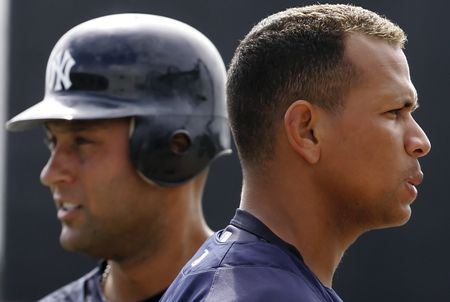 NY was originally set to finish up a four-games series with Miami Thursday night before a three-game series with the Yankees.

Major League Baseball postponed this weekend's Subway Series to allow time for more testing and contact tracing after two members of the New York Mets tested positive for the coronavirus.

This weekend's Yankees-Mets series is in jeopardy after two members of the Mets organization tested positive for COVID-19.

The Miami Marlins had been scheduled to take on the Mets on Thursday night at Marlins Park, but the game was postponed after two members of the NY franchise tested positive for the coronavirus.

The Mets planned to fly to NY on Thursday night and conduct testing for the entire traveling party. The first set was going to take place at the Mets' Citi Field.

The Mets are scheduled to host the Marlins on Tuesday night, the soonest NY may resume its schedule.

The Mets also have a game to make up with the Marlins. The team planned to test its entire traveling party.

The 16-9 Yanks will begin this week's two-game interleague series against the Braves one game behind the AL East-leading Tampa Bay Rays, who swept a three-game series at Yankee Stadium last week.

The two members of the team to test positive were a player and staff member, according to Newsday's Tim Healey. The Cincinnati Reds had just one positive test and it cost them four days.

The Yanks were off last weekend due to a Mets player and coach testing positive to the coronavirus last Thursday.

The Mets are next scheduled to play the Yankees from August 28-30.