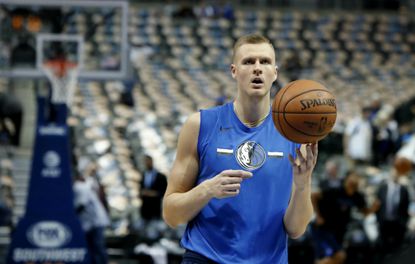 The Dallas Mavericks have reportedly opened an investigation after forward Kristaps Porzingis was left bloodied and beaten in a nightclub altercation in his native Latvia over the weekend.

A video of the incident's aftermath, first reported Sunday by TMZ, shows 23-year-old Porzingis' right eye covered with blood and a gash above the eye. It doesn't appear that the women was part of the initial offending party, however, as she comes over with Porzingis when he begins to speak with what appears to be the authorities.

According to Charania, the Dallas Mavericks are already investigating the alleged incident. A team source told the Dallas Morning News' Brad Townsend that Porzingis was "sucker punched" in the altercation.

Porzingis is also seen getting into an argument with several other people outside of what looks to be a bar or restaurant.

Kristaps Porzingis's turbulent offseason continues. "We will provide an update when one is available". In March, he was accused of sexual assault by a woman in NY, who claims the basketball star raped her in 2018.

Porzingis, who missed all of this past National Basketball Association season with a knee injury, was drafted by the New York Knicks with the 4th overall pick in the 2015 draft.

Porzingis and his legal team have denied these allegations.

May 13 2019
Motorola One Vision's Purported Price, Full Specifications Surface Online Ahead of Launch