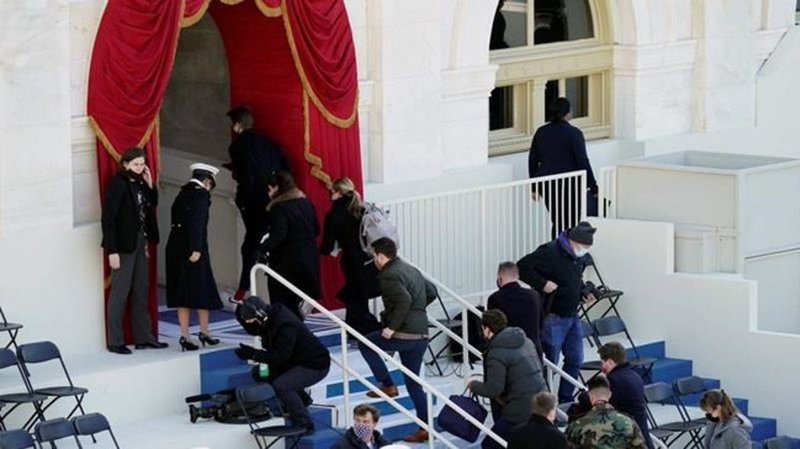 CBS News reports that Capitol Police acting chief Yogananda Pittman issued the shutdown due to "an abundance of caution".

Officials later said the evacuation was due to a fire several blocks away and is not due to a security threat.

Participants were ushered from the West Front of the Capitol.

"All personnel now on the Capitol Complex are advised to stay indoors and away from windows and doors", the police added. "If outside, seek cover", US Capitol Police said in a message, sending a security scare.

The Capitol, which is home to the US Congress, was attacked by a pro-Trump mob on 6 January, leaving five dead.

The entire city has now been converted into a garrison city with thousands of armed national guards being placed in the nook and corners of the city and eight feet high iron barricade around key places including Capitol Hill and the White House.

But U.S. defense officials, anxious about a potential insider attack or other threat from service members involved in securing the event, pushed the Federal Bureau of Investigation to vet all of the 25,000 National Guard troops coming into the area.

The security measures will make Biden's swearing-in a muted affair, unlike any previous inauguration.

The pandemic will further dampen the event, with the crowd thinned by social distancing requirements and required to wear masks.

Other virtual events will include an inauguration day "Parade Across America", an online 50-state tour of speakers, artists, and performers.

Breaking with tradition, Trump has refused to participate in the ceremonial peaceful transfer of power and will leave Washington for Florida hours before the inauguration.