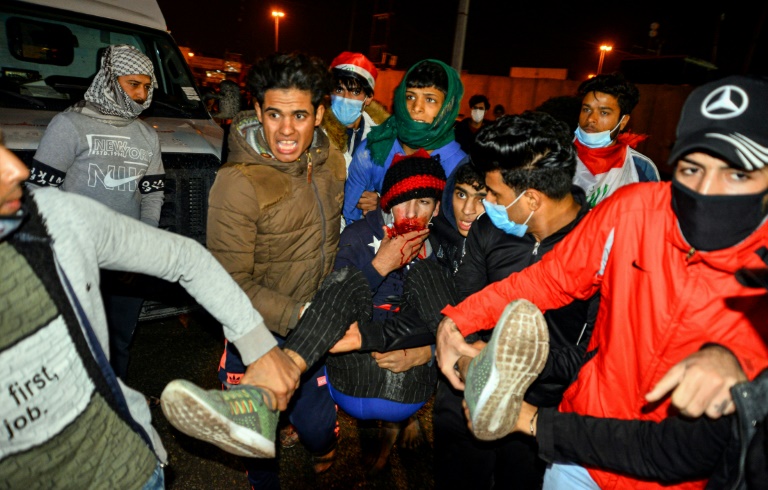 Dozens of people in protest-swept Lebanon staged a candlelit vigil outside Iraq's embassy on Saturday to denounce the excessive use of force against demonstrators there.

Facing pressure from the street and the country's top Shiite cleric Grand Ayatollah Ali Sistani, Abdel Mahdi announced on Friday that he would submit his resignation to parliament, due to meet on Sunday.

Young Iraqis have protested since early October over what they see as the failure of Mr Abdul-Mahdi's failure to address corruption, unemployment and poor public services.

Dozens have been killed in recent days, as police used grenades and tear gas to quell the crowds.

Protesters are mostly unemployed and disenfranchised Shiite youth seeking the departure of those claiming to represent them. He was shot dead.

Abdul Mahdi's government, including himself, will stay on in a caretaker capacity following the lawmakers' vote until a new government can be chosen, the prime minister said later on Saturday in a televised cabinet meeting.

Mr Abdul-Mahdi said he would present to Parliament an official memorandum asking for the resignation of the current Government.

The government, he said, had managed to push through important job-creating projects, improve electricity generation and strengthen ties with neighboring countries. They demand the overhaul of a political system they say is corrupt and keeps them in poverty and without opportunity.

"We will not stop with the prime minister, we still have more fighting to do".

"The Secretary-General reiterates his call on the Iraqi authorities to exercise maximum restraint, protect the lives of demonstrators, respect the rights to freedom of expression and assembly, and swiftly to investigate all acts of violence", said Stéphane Dujarric, in a statement. In Nassiriya, deadly clashes erupted on Thursday hours after the torching of the Najaf consulate.

According to Iraq's High Commission for Human Rights, at least 406 Iraqis have been killed and 15,000 have been injured since protests began October 1.

Layal Siblani, the organiser behind the vigil, said the spiralling violence in Iraq this past week prompted the show of solidarity.

The Iraqi Parliament is expected to discuss whether to allow Abdul-Mahdi's resignation, but the overall view is that it will be inevitable.

A statement issued by the commission did not acknowledge the prime minister's resignation.

Amnesty International on Friday also urged the Lebanese army "to end arbitrary arrests" and torture of peaceful protesters following a wave of detentions.

Form for signing up for free newsletter.