Derby County's travelling support is up there with the best, says Clement 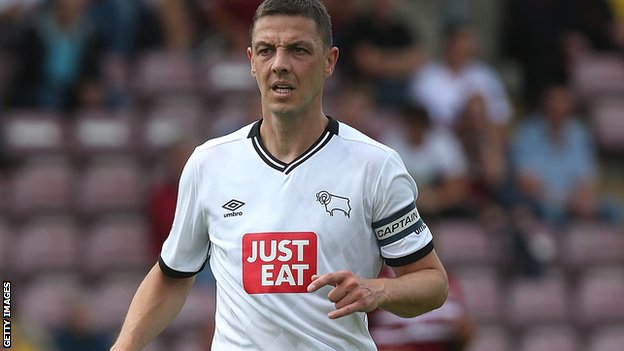 DERBY County goalscorer Tom Ince admits it was a "bad performance" by the Rams in their 3-1 win at MK Dons but believes they can build on the result.

"The iPro has been virtually full every home game, and the fans have really supported the team, but I have got to say I have been really, really impressed with the away support", said Clement.

"We didn't deserve that at all", said Dons boss Karl Robinson. Our shape wasn't good, our energy, our pressurising.

"It's good that Darren Bent's got a goal because I know he's been frustrated", said Clement.

"We know that they played in midweek in a hard game (against Southampton in the League Cup) and they got beat 6-0".

The Rams were particularly poor in the first half of the televised Championship clash but after the break Bradley Johnson scored his first goal for Derby to open the scoring.

Church was again denied from close range, but it was Carson this time who proved the difference before Ince played through Martin and saw his low shot well parried. Jake Forster-Caskey's through ball was received by Church, whose cross was collected by Murphy.

Tom Ince missed Derby's best chance of the half just before half-time, the forward was bearing down on Dons keeper Martin one-on-one but took one to many touches and blazed the chance over the bar. Johnson cost Derby £6m before the transfer deadline while Murphy is on a season-long loan.

Derby travel to the Stadium MK to face MK Dons on Saturday priced as bet365's even-money favourites to score an away win.

Clement, who celebrated Bent's goal by running down the touchline, could reflect that life in his first managerial role, having cut his teeth as assistant at Paris Saint-Germain and Real Madrid, is proving anything but boring. "You can do all the preparation and have all the experience as an assistant, go on the courses and read books, but nothing can replicate what it's actually like".