Death Toll Rises to 104, Over 6000 Injured Amid Protests Across Iraq 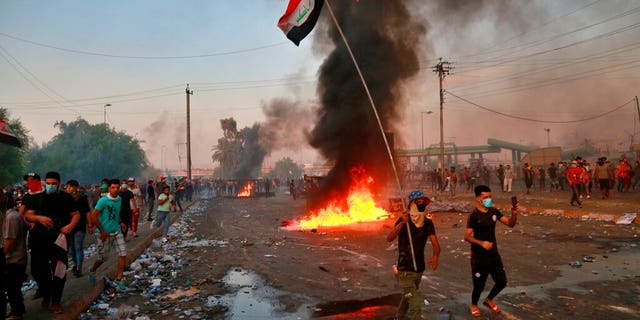 The unrest is the deadliest Iraq has seen since the declared defeat of Islamic State in 2017 and has shaken Prime Minister Adel Abdul Mahdi's year-old government.

Demonstrators run at a protest during a curfew, three days after the nationwide anti-government protests turned violent, in Baghdad, Iraq October 4, 2019.

The death toll after six days of unrest has been estimated to have passed 100 and more than 6,000 have been wounded. Health and security officials said 183 were injured in the protests, adding that most of the injuries were to the head and chest.

Four others were wounded, according to officials who spoke on condition of anonymity because they were not authorised to brief reporters.

Monday's order for the withdrawal of the army from Sadr City appears aimed at calming tensions in the sprawling neighborhood, where populist Shiite cleric Muqtada al-Sadr enjoys wide support.

Saad Maan, a spokesman for Iraq's Interior Ministry, said an investigation was under way to determine the source of live fire that killed numerous more than 100 people who had died since the unrest began.

He added at a press conference that "malicious hands" had been targeting protesters and security forces on Friday as well, the bloodiest day of the unrest in Baghdad. Masked gunmen attacked several media outlets, including the offices of NRT, Al-Arabiya, Al-Hadath, Fallouja TV, Al-Ghad Al-Araby, SkyNews Arabia, Al-Sharqiya and Dijlah TV.

Anti-government protesters set fires and close a street during a demonstration in Baghdad.

In the southern city of Kut last month, a young Iraqi man died after he set himself alight in despair after authorities seized his mobile kiosk.

Ducking in reaction to the fire, some protesters piled over one another trying to hide behind the wall of a nearby water fountain. The protests come despite calls from Abdul Mahdi for the demonstrators to stay off the streets.

The Iraqi government announced a series of reforms early on Sunday after an "extraordinary" session overnight in response to sweeping anti-government rallies that have left almost 100 dead in less than a week.

It comes after vague offers of reform promises from the government which included subsidised housing for the poor, stipends for the unemployed as well as training programs and small loans initiatives for unemployed youth.

Since the start of the protests Tuesday, security forces have responded with live ammunition and tear gas, leaving at least 65 people killed in Baghdad and other southern cities.

The Iraqi MP highlighted the clashes between protesters and security forces, pointing out that Iranians were killing them all. "Beyond the protest movement, there is also a political crisis brewing".

"Amid all of this, I swear to God that my only concern is for the casualties", Abdul Mahdi was quoted by state television as saying during the cabinet meeting.

The parliament failed to hold a session on Saturday to look into the protesters' demands. "We don't want anyone to speak in our name", one protester told the AFP news agency on Friday.