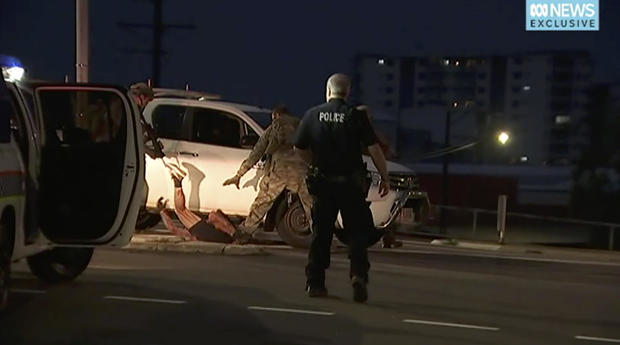 Four men have been killed and a woman has been wounded after a gunman opened fire with a pump action shotgun in five different locations in Darwin.

Woolner is an upper middle class suburb of Darwin, about three miles from the central business district.

Witnesses told local media that the suspect, a white male, was seen with a sawn-off pump-action shotgun, but police did not confirm the make of the gun.

Police earlier said the suspect was wearing a high-visibility shirt and driving a Toyota pickup truck.

According to the ABC, there are further crime scenes at the Buff Club in Stuart Park and on Gardens Hill Crescent in The Gardens.

Local Newspaper NT News reported police believe there were no other shooters involved.

Two people were taken to the Royal Darwin Hospital with gunshot wounds and both were in stable condition, a Health Department statement said.

Witness Leah Potter told ABC News that a woman was shot multiple times in the legs at the Palms Hotel.

He said the rampage started about 5.45pm at the Palms Motel.

There were reports of a fifth fatality outside the city centre, but this was not confirmed by the authorities.

A man, believed to be the injured woman's boyfriend, dropped her on the road to go and get help from police.

Prime Minister Scott Morrison has moved to condemn mass shootings in Darwin tonight but has ruled out terrorism as a motive for the killings.

The woman said she wrapped the victim's legs in towels while waiting for an ambulance and police.

"I just want to extend my deep condolences and sympathies to all the people of the territory... This is a very tight community and I know they'll be rocked by these events".

"Our advice is that this is not a terrorist attack, nothing to suggest that's the case whatsoever".

Darwin is the capital of Australia's Northern Territory and a former frontier outpost.