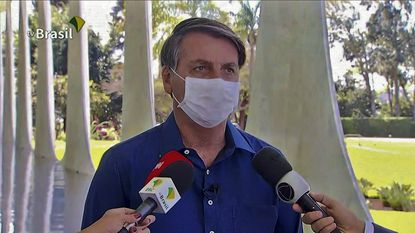 Brazil's president, Jair Bolsonaro, has tested positive for COVID-19, adding in a television interview that he was in good health despite running a fever.

Brazil's president Jair Bolsonaro said he is confident of recovering quickly from coronavirus as he has been taking hydroxychloroquine, the unproven anti-viral malaria drug touted by Trump.

Brazil has the world's second-largest outbreak behind the US, with more than 1.6 million confirmed cases and 65,000 COVID-19 deaths.

The head of the prestigious Royal Society science journal said Tuesday that people who refuse to wear masks should even be stigmatized in the same way as drink-drivers.

More than 23,000 people who had not been diagnosed with COVID-19 died from respiratory infections between January 1 and June 6, according to Fiocruz, one of Brazil's state-run health research institutes.

Bolsonaro has been an outspoken critic of coronavirus, downplaying its severity and prevention measures.

He is just the second major world leader, after British Prime Minister Boris Johnson, to confirm he contracted the virus.

Bolsonaro had often appeared in public to shake hands with supporters and mingle with crowds, at times without a mask.

He has also repeatedly said that there is no way to prevent 70% of the population falling ill with COVID-19 and that local authorities' efforts to shut down economic activity would ultimately cause more hardship than allowing the virus to run its course. "He is going to have health and get through this sickness".

Cities and states last month began lifting restrictions that had been imposed to control the spread of the virus, as their statistical curves of deaths began to decline along with the occupation rate of its intensive-care units. Bolsonaro has also railed against social distancing rules supported by the World Health Organization.

One of Bolsonaro's most infamous assertions was that he, as former athlete - Bolsonaro was a paratrooper in the Brazilian army - need not worry about the risk of coronavirus infection.

ABC News reported that Bolsonaro's frequent mask-less appearances included one at a July 4th celebration at the American Embassy, where he was photographed with U.S. Ambassador to Brazil Todd Chapman. His first test dates back to early March when the right-wing populist returned from a meeting with US President Donald Trump in Florida.