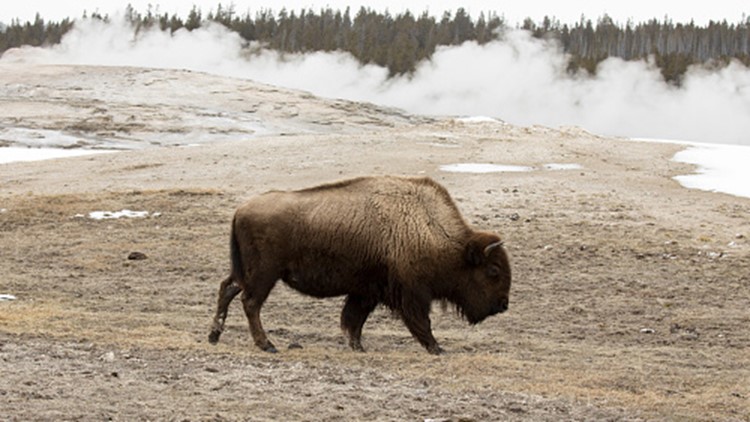 A California woman was rushed to the hospital Wednesday after being gored by a bull bison near Yellowstone National Park's Fountain Paint Pot boardwalk.

In a statement, the National Park Service said: "Hancock and a crowd of people approached within ten yards of the bison while walking along a boardwalk". "The bison became agitated and charged the crowd", and one of its horns struck Hancock in the hip, a news release from the park said.

The bison left the area right after. She was eventually transported by ambulance to the Big Sky Medical Center in Big Sky, Mont. and is now in good condition.

Conflicts have raged for years over how many bison the park can sustain and methods used to keep the population contained.

Environmentalists on Friday accused the Trump administration of political interference and retaliation in the ouster of Yellowstone National Park's chief after his disputes with U.S. Interior Secretary Ryan Zinke over the park's celebrated bison. Rangers advise staying at least 25 yards away from animals like bison and elk, the park said.

The park's practice of capturing and shipping to slaughter a certain number of bison that wander from Yellowstone in winter in search of food in Montana, Zinke's home state, is driven in part by ranchers there who are concerned about competition for rangelands and about the spread of brucellosis, a disease carried by some bison that can cause cows to miscarry.

Wenk recently announced he would retire from running Yellowstone National Park in March 2019 instead of being reassigned to a new role in D.C. But then this week, he said the acting director of the National Park Service, P. Daniel Smith, gave him an ultimatum: take the new position in D.C. or retire early. An elk also kicked a different woman's head Sunday, but the park service said it was unknown if the same elk were responsible.

The two women were among four people injured by various types of wildlife in the park in just over a month.

"If you can't maintain these distances, turn around and find an alternate route", the park advised. At one point, officials say, some people were within 15 feet of the animal.