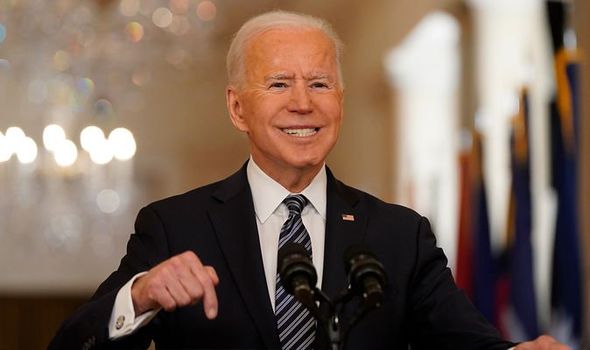 The signing Thursday came hours before Biden delivers his first prime-time address since taking office. "We must act now and act decisively", Biden said in the January remarks. After this long, hard year, that will make this Independence Day something truly special, where we not only mark our independence as a nation, but we begin to mark our independence from this virus.

Marking a year of loss and disruption, President Joe Biden signed into law a $1.9 trillion relief package that he says will help the US defeat the virus and nurse the economy back to health.

"This historic legislation is about rebuilding the backbone of this country and giving people in this nation - working people and middle-class folks, the people who built the country - a fighting chance", Biden said before the signing. But as the financial stimulus from the newly enacted relief bill reaches a growing number of vaccinated people, Biden offered cautious optimism to a country that, like the rest of the world, is exhausted of pandemic restrictions and economic pain.

Biden announced an expansion of other efforts to speed vaccinations, including deploying an additional 4,000 active-duty troops to support vaccination efforts and allowing more people - such as medical students, veterinarians and dentists - to deliver shots.

The Biden administration will ship vaccines to 950 community health centers in an effort to get the coronavirus vaccine to disadvantaged communities.

Whether Americans feel the effects of the relief package over the next few months will be crucial for Biden's presidency as the pandemic continues to present major challenges to American life. But I need you, the American people.

That doesn't mean large events with lots of people together. "I need you. I need every American to do their part".

In an appeal to the whole country, Biden urged everyone to do their "part", which he said included wearing face masks.

The House gave final congressional approval to the sweeping package by a near party line 220-211 vote on Wednesday, seven weeks after Biden entered the White House and four days after the Senate passed the bill. White House chief of staff Ron Klain said the enrolled bill arrived at the White House on Wednesday night, "so @POTUS is signing it today - we want to move as fast as possible".

Since vaccine distribution began in the United States in December, more than 93 million doses have been administered, reaching about 18.4% of the total US population. 'FIGHTING CHANCE'Earlier in the day Biden, signed the American Rescue Plan law, created to be a financial bridge to hard-hit Americans and a boost to the economy, with Vice President Kamala Harris at his side in the Oval Office. Biden campaigned a year ago on a promise that he would tackle the pandemic more effectively than Republican President Donald Trump, and he has sought to encourage and model behavior, such as mask-wearing, that Trump eschewed.