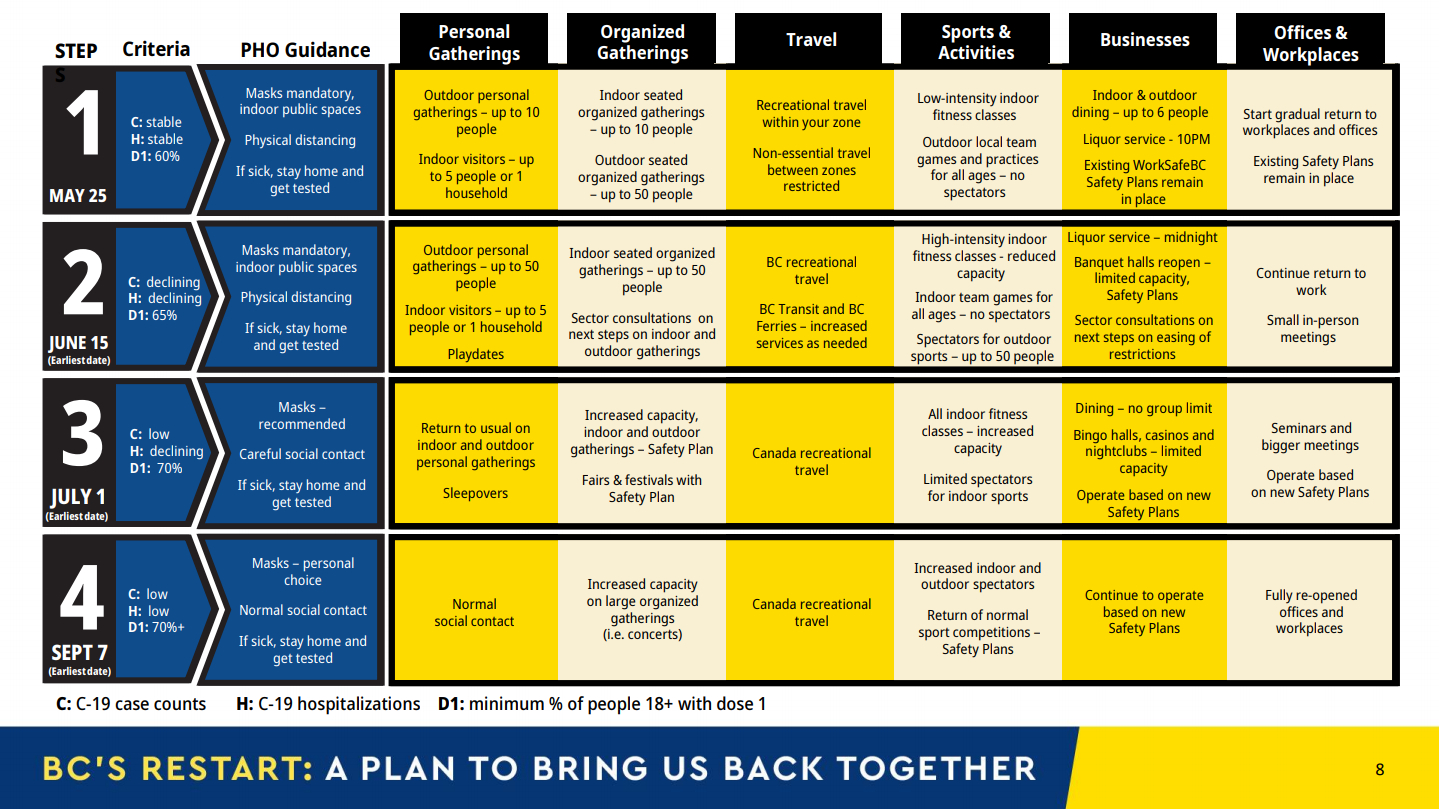 Safety protocols for indoor in-person religious gatherings and worship services of any size are being reviewed and will be updated shortly.

Canada Day is the third major milestone outlined in the plan, with the goal of having 70 per cent of the adult population vaccinated with at least a single dose.

In order to progress further into the restart plan, factors such as COVID-19 case counts, hospitalizations and deaths, and vaccination levels will be taken into account.

She said to prevent potential COVID-19 spread in communities, provincial travel restrictions will not be lifted until June 15 at the earliest, with recreational travel permitted only within residents' regions.

- In-person faith-based gatherings can be held in a reduced capacity.

Indoor sports can also resume at that point, and up to 50 fans will be allowed at outdoor sporting events.

Indoor dining at restaurants, which was banned for a couple of weeks, is now allowed with six people per table including people outside their households.

Premier John Horgan said B.C.'s strong immunization rate allows the province to slowly bring people back together, with September 7 a target date for the final phase of the plan to be implemented.

- Indoor sports games and high-intensity fitness would be allowed with safety protocols.

Movie theatres will also open with a maximum occupancy of 50 people.

Masks will still be mandatory for indoor public spaces, continued physical distancing, and stay home and get tested if feeling sick.

People who have visited their friends outdoors may have also stopped short of going in for hugs; some of them continue to don face masks around friends they don't live with, too.

- Nightclubs and casinos reopened with capacity limits and safety plans.

That means the earliest the public health emergency and provincial state of emergency could be lifted would be July 1.

Dr. Bonnie Henry s pitched the idea of a "B.C. Hug Day" to Premier John Hogan on May 25, 2021, to celebrate the return of the social embrace.

A spokesman for an organization representing Canada's largest airlines said in a statement B.C.'s plan gives clarity to the industry and consumers.