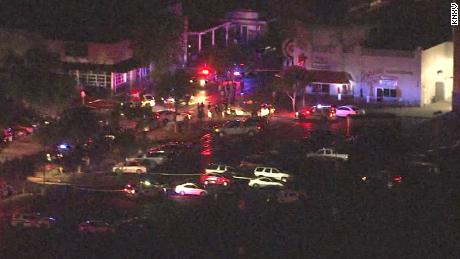 The Glendale police department tweeted that at least two people were injured and one person was in custody without revealing the suspect's identity. Two other victims were taken to the hospital with non-life-threatening injuries.

The police spokesperson said they are aware of a video posted to social media that purportedly shows the shooting, but can not confirm if that video is accurate.

Westgate Entertainment District is overlooked by the University of Phoenix Stadium and includes more than 20 restaurants, as well shops, spas and arcades.

"We locked the doors and shut the lights off as soon as we heard the gunshots go off", she wrote.

Around 15 minutes later, the police said on Twitter that there were no more reports of active shooting.

At least two people were shot Wednesday night at the Westgate Entertainment Center shopping complex in Glendale, Arizona, according to police.

Once police arrived, the shooting had already ended, and officers managed to locate the suspect.

Police have not identified the suspect.

Video shows the suspect walking calmly across the complex's parking lot about 7:30 p.m. Wednesday while brandishing an assault weapon before terrified shoppers fled amid the sound of gunfire, the station reported.

"I'm ok. Lots of shaken up people", Quezada wrote. "There are multiple victims", he tweeted.

Mr Quezada said he did not know how many others had been shot. Being told not to say anything else about details until I speak to police.

The governor, Doug Ducey, said he's monitoring the situation and "the state is here to continue to offer its full support to the victims and to the community".

However, the person on camera identified himself as Armando Junior Hernandez and said in part, "I'm gonna be the shooter of Westgate". Outdoor malls reopened days prior. Police officials told Fox 10 they are aware of video on social media involving the shooting, and they are asking people with the video to send them to police by contacting Silent Witness, or by calling Glendale Police.

This is a developing story.