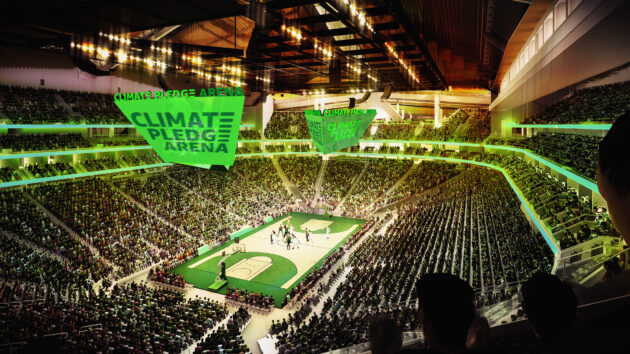 The old KeyArena is being renovated for the new Seattle team as well as the WNBA's Storm and it was revealed that Amazon bought the naming rights to the arena.

"We look forward to working together with Oak View Group, a new Climate Pledge signatory, and NHL Seattle to inspire global climate action", Bezos said. It is seeking to become the first carbon-neutral arena, powered entirely by renewable energy, with investments in forestry projects undertaken as an offset to any emissions. It is our time to step up to face the challenge of our generation.

The goal for Climate Pledge Arena is to earn a Zero Carbon Certification from the International Living Future Institute (ILFI), which provides independent third-party certification for standards for clean energy.

On Tuesday, the company announced that its carbon footprint grew 15 percent in 2019 compared to 2018.

According to report by VenuesNow, which cites unnamed sources, the total value of the deal 'runs between US$300 million and US$400 million, which places Climate Pledge Arena among the richest deals for a big league arena'.

"'We were talking about Amazon and talked about community", he said.

"There will be many opportunities for our fans to make a difference nightly", said Tod Leiweke.

The venue name is a nod to CEO Jeff Bezos' $2 billion pledge to make Amazon carbon neutral by 2040, which came after thousands of employees signed an open letter previous year pressuring the company to better address its climate impact.

The building, formerly known as Seattle Center Coliseum and KeyArena (among other names), initially opened in 1962 and was the longtime home of the NBA's Seattle SuperSonics until the team left for Oklahoma City in 2008. The Climate Pledge was founded by Amazon and Global Optimism last September.

The arena at Seattle Center is now being reconstructed into what will effectively be a brand new arena under the "iconic" roof, which is being preserved.