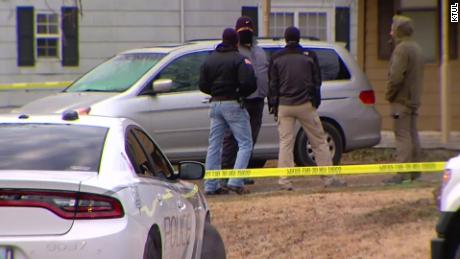 A gunman has killed a man and five young children, and left a woman seriously injured in an apparent domestic incident at a home in Oklahoma.

Officers responded about 1:30 a.m.to a call of multiple people shot at a home in Muskogee, a city of just under 40,000 people about 45 miles (72 kilometres) southeast of Tulsa, police said in a press release.

Muskogee Police Officer Lynn Hamlin described the slain youths as "small children", but said police do not have exact ages yet. An officer fired a shot, but missed the man, and he took off running.

The man and four of the children, none of whose names have been released, were dead when police arrived.

A woman who was shot and wounded was in stable condition Tuesday afternoon, Hamlin said. Emergency crews transported a fifth child to a Tulsa hospital by helicopter, who later died. The suspect is a member of the victims' family, Muskogee Police Chief Johnny Teehee told NBC News. There remains one survivor: a woman suffering life-threatening injuries.

Police later took the suspect into custody, though no additional information regarding their identity or charges was provided.

The suspect was being held in the Muskogee County jail Tuesday morning, according to Hamlin. He was later caught and arrested, he has been identified as Pridgeon.