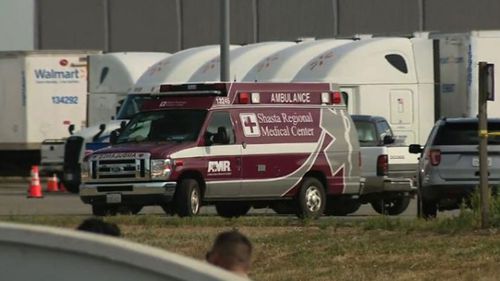 He was shot by police and was pronounced dead at a local hospital, the Tehama County Sheriff's Office said.

A shooting on Saturday at a Walmart distribution center in Red Bluff, California left at least two people dead - including the attacker - and four others wounded.

The two deceased people and the four injured ones were taken to St. Elizabeth Community Hospital in Red Bluff, spokeswoman Allison Hendrickson told The Associated Press. When he reached out to help a woman who was trapped, he heard gunshots being fired.

The incident began just after 3 p.m. when deputies were notified of an active shooter situation at the 1.1-million-square-foot facility, which had about 200 workers inside at the time, some of whom locked themselves in store rooms as shots rang out.

Law enforcement engaged in shots with the gunman.

According to officals, the shooting occurred on Saturday, June 27 around 3:30 p.m. when 31-year-old Louis Lane drove into the Walmart Distribution Center lobby with his auto and began randomly firing his weapon at those inside.

Scott Thammakhanty, an employee at the facility's receiving center, said he heard what sounded like semiautomatic weapon fire.

"It went on and on - I don't even know how many times he fired", Thammakhanty said.

He told the newspaper that he didn't know the shooter's identity but that he looked familiar.

A Walmart employee, Franklin Lister, 51, said he and a group of other employees had just clocked into their afternoon shifts when an employee ran down the hallway shouting: "Active gunfire!

Officials at the scene told the Record Searchlight in Redding that the man was in surgery".

Scott Pope, a Walmart spokesman, said the company was deeply saddened by the incident.