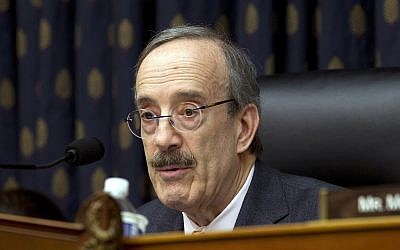 "Anti-Semitism has no place in the United States Congress and I think she should either resign from Congress or she should certainly resign from the House Foreign Affairs Committee", the president said, adding that her comments were "deep-seated in her heart".

But it's unclear if Trump understands what the points of contention are.

In a lengthy and blistering rebuke late Friday, Rep. Eliot Engel, the chairman of the House Foreign Affairs Committee, said Omar's remarks amounted to a "vile anti-Semitic slur" and called on the Minnesota Democrat to apologize. "I am sure we agree on that!" she added.

Omar serves on the Foreign Affairs Committee, and some of her critics have called on Democratic leaders to strip her of that assignment.

Ms. Lowey, who leads the Appropriations Committee, tweeted Saturday that she was "saddened that Rep. Omar continues to mischaracterize support for Israel". Last month, she offended lawmakers in both parties for suggesting on Twitter that political support for Israel was entirely motivated by money doled out by AIPAC, the pro-Israel lobby. She openly supports BDS (Boycott, Divestment, Sanctions) against the Israeli government and has been outspoken about the sway AIPAC has in Washington. "The American Jewish community is diverse, and includes huge constituencies for liberal centrist "J street" & progressive "Jewish Voice for Peace" & "If Not Now", all of whom object to varying degrees to Israel's brutal military occupation of Palestine".

The 29-year-old mixed-up the Afghanistan and Iraq wars when she responded to the criticism on Rep. Omar and compared it to shifting attitudes to U.S, involvement in foreign conflicts.

House Democratic leaders released a statement condemning her remarks at the time.

Greenblatt explained the ADL's issue with Omar's latest statement: "Accusing Jews of having allegiance to a foreign government has always been a vile anti-Semitic slur that has been used to harass, marginalize, and persecute the Jewish people for centuries".

The latest controversy comes as Omar was the subject of an Islamophobic attack in West Virginia's state house where a poster was on display for a Republican party event that linked the congresswoman to the September 11, 2001 terrorist attacks.

Omar wrote, "Our democracy is built on debate, Congresswoman!"

"I want to talk about the political influence in this country that says it is OK for people to push for allegiance to a foreign country", Omar said, apparently referencing Israel.

She wrote: 'I'm curious if Rep. Vargas will further explain his stance here that it's unacceptable to even *question* USA foreign policy. I find that to be problematic and I am not alone. She soon apologized and said, "Anti-Semitism is real and I am grateful for Jewish allies and colleagues who are educating me on the painful history of anti-Semitic tropes".

Omar did not hold back, tweeting on Sunday that she "should not be expected to have allegiance/pledge support for a foreign country" in order to sit in Congress.